I'm a professor of history at Central Connecticut State University.

via Slate and Nursing Clio

Both blogs discuss Peggy Noonan’s November 23 Wall Street Journal column, in which Noonan claims the “sexual harassment racket” is a product of the sexual revolution and the growing availability of contraception and abortion:

“Once you separate sex from its seriousness, once you separate it from its life-changing, life-giving potential, men will come to see it as just another want, a desire like any other,” Noonan wrote . “Once they think that, then they’ll see sexual violations as less serious, less charged, less full of weight. They’ll be more able to rationalize. It’s only petty theft, a pack of chewing gum on the counter, and I took it.”

Numerous women’s historians, including Kathy Peiss, Ann Taves, Estelle Friedman, Danielle McGuire, Kathleen Brown, and Christine Stansell have disproven this claim, demonstrating the working women, especially slaves and free women of color, have faced sexual harassment and assault for centuries. What’s new is that women’s stories are finally being taken seriously and male predators are being punished for their actions.

Noonan’s ideas can be traced back to the 19th century social purity movement, led by women who wanted to end prostitution and the sexual exploitation of women. According to historian Linda Gordon, social purity advocates “were unequivocally opposed to contraception” because it removed the fears of unwanted pregnancy and sexually transmitted diseases that kept predatory men in line. However, Gordon also shows that social purity advocates were also photo feminist in the sense that they wanted to eliminate the sexual double standard, punish the customers of prostitution as well as prostitutes themselves, and raise the age of consent from age 10 to 18.

In other words, these reformers were combatting the sexual exploitation of women, which they saw as an offshoot of women’s economic and legal dependence on men. In an article entitled “Social Purity,” Susan B. Anthony wrote:

“Though women, as a class, are much less addicted to drunkenness and licentiousness than men, it is universally conceded that they are by far the greater sufferers from these evils. Compelled by their position in society to depend on men for subsistence, for food, clothes, shelter, for every chance even to earn a dollar, they have no way of escape from the besotted victims of appetite and passion with whom their lot is cast. . . The prosecutions on our courts for breach of promise, divorce, adultery, bigamy, seduction, rape; the newspaper reports every day of every year of scandals and outrages, of wife murders and paramour shooting, of abortions and infanticides, are perpetual reminders of men’s incapacity to cope successfully with this monster evil of society.”

Noonan and other foes of abortion have seized on these words and made Anthony into an anti-abortion heroine by taking Anthony’s words out of context.  To quote Anthony, by condemning abortion, and poo-pooing sexual harassment and other social injustices against women, today’s pro-life activists are “only mowing off the top of the noxious weed, while the root remains.”

Via Chronicle Vitae where Mark Carrigan makes a strong case that social media can be intrinsic to scholarship. I agree!  Knitting Clio started off as a scholarly blog. I still see it that way, even though much of my thinking lately has been off line or on other platforms (see my Twitter stream).

On December 16, 1975, a group of Washington, D.C. area women’s health activists held the first-ever protest at the headquarters of the U.S. Food and Drug Administration. The demonstration took the form of a “memorial service” to commemorate the thousands of women who had died from using the contraceptive pill and other estrogen-containing drugs, and…

via Women’s Health, Feminist Activism, and the Pill — Nursing Clio

I’m teaching a course on material culture next semester — this gives me some good ideas!

In Episode 13 of Under The Knife, I discuss the history behind reusable condoms, and the terrible diseases that made them necessary in earlier centuries. The video may or may not also involve me wearing an inflatable condom costume…

Don’t forget you can now pre-order my book THE BUTCHERING ART by clicking here! And please subscribe to my YouTube Channel, and like/comment on the video!

Now that season 2 of the PBS drama Mercy Street has wrapped up, I’m going to comment on an incident that has been bugging me for several weeks. In this season, young Alice Green  turns into a “She Rebel” by spying  for the Confederates.  In one scene, she fends off a Union soldier who wants to inspect her handbag by saying she is carrying supplies for her “monthlies” and doesn’t want to be embarrassed by having a man see them.

After this episode aired, my friend Lara Friedenfelds wrote a great piece on menstruation in the Victorian era for the National Museum of Civil War medicine blog.  She observes that most women carried on with their lives during their periods rather than swooning on chaise lounges.  So, it’s not hard to imagine that Alice was in fact menstruating while she was galloping around the countryside for the Rebs.

What I have trouble believing is that Alice would discuss her period in front of men  (including her own father).  Historian Joan Jacobs Brumberg has shown that during the nineteenth century, doctors complained about mothers did not prepare their daughters for menstruation.  In other words, young girls couldn’t talk with their mothers about this delicate topic, much less their fathers, and certainly not men outside their families.

Otherwise, this season’s treatment of medical history has once again been top notch.  Can’t wait for season 3.

[added later — my friend Penny Richards observes below that this was the era before sanitary napkins and tampons.  So, Miss Alice would be using a piece of cloth, which her slave would be in charge of carrying and laundering for her].

via Timeline, where Stephanie Buck trots out the tired stereotype of Generation X as a bunch of lazy slackers “who who skateboarded through high school with flannel shirts and angry music during a period of economic stability.”

I could just say “whatever,” but since I’m a historian, and by some measures, belong to Generation X (I’m younger than Douglas Coupland, author of Generation X).  I can assure you that the late 1980s and early 1990s were not times of economic stability.  This was the Bush 41 recession that helped pave the way for the election of President Bill “the economy stupid” Clinton.  The title of chapter 2 of Generation X, “Our Parents Had More,” sums up the climate  of diminished opportunities for those of us graduating from college and graduate school.  Richard Linklater’s film “Slacker” also depicts the lives of overeducated/underemployed “misfits” in a college town (Ithaca, NY had many real-life counterparts).

I was one of the few people in my graduate school cohort to get a tenure-track job (or a job at all).

So, let’s dispense with these generational stereotypes, m’okay?

Over the weekend, I saw a discussion of “new wave feminists” on Twitter.

I immediately thought of these awesome group of women New Wave musicians: 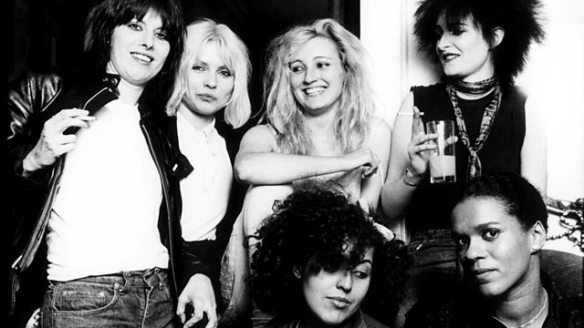 [Image courtesy of BBC.  Can you name them all?}

Turns out I was mistaken:  the reference was to a group of pro-life feminists who had originally been included as partners for the Women’s March on Washington.  After complaints from pro-choice groups, the march organizers cancelled the partnership with New Wave Feminists.

The concept of pro-life feminism is not new:  Feminists for Life has been around for decades.  Even Margaret Sanger was opposed to abortion.

I believe that the tent of feminism should include pro-life feminists.  However, New Wave Feminists are hardly inclusive.  Here’s a quote from their website:

“New Wave Feminists are here to take feminism back from those who have corrupted it.

Sometime before we were born

our womanhood was traded for a handful

the “privilege” to degrade ourselves in playboy,

and the “right” to abort our children.

It’s time for the return of common sense feminism which refuses to exploit women in the name of liberation and create victims while settling for equality. Instead, we will live up to our full potential and demand others rise up to that level as we embrace how strong and bad ass women truly are.”

Sorry, so-called New Wave Feminists.  If you want respect from other feminists, you need to take the beam out of your own eye.  Supporting reproductive rights does not “corrupt” feminism.  I’m pretty badass myself. Here’s what an old-school, New Wave feminist looks like (Knitting Clio in 1986)

I’ve heard that the 1980s are back (including bad fashion choices), so I’ve decided to put together a playlist of protest songs that got us through the Reagan/Bush 41 era:

REM, “Exhuming McCarthy”  — because of POTUS attacks on free press

Dead Kennedys, “Jock-o-rama” — because the “beef patrol” is in charge (for now)

Fishbone, “Party at Ground Zero” — because the Donald now has the nuclear codes

Men at Work, “It’s a Mistake” — because we’re headed for a new Cold War

Billy Bragg, “Help Save the Youth of America” — because they need it

The Police, “Invisible Sun” — because we need to keep hoping things will get better

Neil Young, “Rockin’ in the Free World” — because it’s a free country (for now)

As you all know, I actually do knit.  Like other crafty women, my election anxiety by knitting pussy hats for the Women’s March on Washington on January 21.  I can’t attend the main event but will be going to the Sister March in Hartford and sending my friends to Washington with my handiwork.

Here’s a signal boost for my latest article, “This is Not a Dalkon Shield”  for the Society for the History of Technology publication Technology’s Stories.  Make sure to check out the other stories while you’re there!

If you want your very own pair of IUD earrings, you can order them here.

This work is licensed under a Creative Commons Attribution 3.0 Unported License.

This work is licensed under a Creative Commons Attribution 3.0 Unported License.
Drunk Austen

Orientalism and Yoga in the 21st Century

is a Vice Provost, Dean, and Professor at Northeastern University

History for the Future

How did Vikings communicate at sea?

Danczuk Digital History
History Has Its Eyes On Me

Why Do You Write Like You're Running Out Of Time?

A site to think about my academic work the same way I do everything: by overthinking it.

History in the Digital Age

I WILL NOT SOON FORGET YOUR KINDNESS OR YOUR DECENCY
recklessknitting.wordpress.com/
The Junto

The latest news on WordPress.com and the WordPress community.