Earlier this week, Sinéad O’Connor wrote a 1,000-word post to Miley Cyrus on her on her personal blog, warning Cyrus about being exploited by the music industry.  “I am extremely concerned for you that those around you have led you to believe, or encouraged you in your own belief, that it is in any way ‘cool’ to be naked and licking sledgehammers in your videos.” She adds: “It is in fact the case that you will obscure your talent by allowing yourself to be pimped, whether its the music business or yourself doing the pimping.”

Cyrus apparently didn’t appreciate that O’Connor wrote the letter “in the spirit of motherliness and with love.” Instead, Cyrus tweeted a screen grab of O’Connor’s Twitter feed from 2012, and compared the singer to Amanda Bynes, who is currently receiving psychiatric care to address mental health issues. 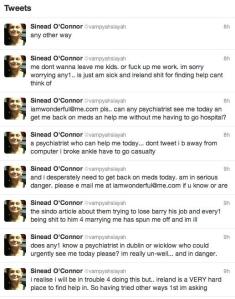 O’Connor was not amused and has threatened to sue the younger singer.  In another open letter published on her Facebook page, Sinead O’Connor wrote:

“Who the f–k is advising you? Because taking me on is even more f–kin’ stupid than behaving like a prostitute and calling it feminism. You have posted today tweets of mine which are two years old, which were posted by me when I was unwell and seeking help so as to make them look like they are recent. In doing so you mock myself and Amanda Bynes for having suffered with mental health issues and for having sought help. It is most unbecoming of you to respond in such a fashion to someone who expressed care for you. And worse that you are such an anti-female tool of the anti-female music industry.”

“Sinead. I don’t have time to write you an open letter cause I’m hosting & performing on SNL this week, So if you’d like to meet up and talk lemme know in your next letter. :)”

O’Connor replied on Facebook:  “I have no interest whatsoever in meeting you. You had plenty of time yesterday to abuse Amanda Bynes .. an entirely innocent party.. and myself.. who also did nothing to deserve your abuse.. along with every other sufferer of mental health problems and every person who suffered abuse at the hands of priests. . .Cease behaving in an anti-female capacity. You will become the victim of it shortly. Soon it will be you the media ‘crazy’ .. and you will not enjoy it.. and you will appreciate people (like myself) standing up for you. Which I will be happy to do.. if you earn my respect today by apologising publicly.”

Some of you will probably say, why bother with what amounts to celebrity gossip?  Well, I’ve been a fan of O’Connor for years and was really dismayed by the reaction when she tore up a picture of the pope on Saturday Night Live in 1992. As The Atlantic reported last year “the media largely misunderstood why” O’Connor chose to protest against the Pope in this fashion.  Some called her “crazy,” others were merciless in their contempt.  Joe Pesci, who hosted SNL the following week, told the crowd, “She’s lucky it wasn’t my show. Cause if it was my show, I would have gave her such a smack. I would have grabbed her by her… her eyebrows. I woulda…” (tossing gesture)  The audience laughed and applauded.  Later that year, O’Connor was booed off the stage a tribute concert for Bob Dylan, who failed to make any remarks in her defense. During a rally in New York, “piles of her records, tapes, and CDs were crushed by a steamroller. Protesters declared the United States a ‘Sinead O’Connor-free zone.’ Within a year of her SNL protest, O’Connor had disappeared from the American pop scene.”

In an interview with Time a month after her SNL performance, O’Connor explained her actions:

“It’s not the man, obviously—it’s the office and the symbol of the organization that he represents… In Ireland we see our people are manifesting the highest incidence in Europe of child abuse. This is a direct result of the fact that they’re not in contact with their history as Irish people and the fact that in the schools, the priests have been beating the shit out of the children for years and sexually abusing them. This is the example that’s been set for the people of Ireland. They have been controlled by the church, the very people who authorized what was done to them, who gave permission for what was done to them.”

At the time, the interviewer was skeptical of O’Connor’s claims, but the recent revelations of widespread sexual and physical abuse in Catholic schools and institutions has proven her testimony to be dead on.  So, that’s why I’m on #teamSinead.  Peace, sister.