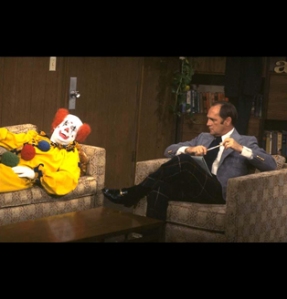 This past Sunday, I took a break from Olympics coverage to watch the excellent PBS American Masters episode on Bob Newhart.  The documentary reminded me how much I loved the original “Bob Newhart Show” (the later one, not so much, even though it was set near my home town in Vermont).  I was also struck by Newhart’s recollections on why the producers decided to make Bob Hartley a psychologist:

“Then they wondered what kind of occupation would that be and suggested psychiatrist . . I said, I think psychiatrists really deal with more disturbed patients, and I don’t think we should get our humor from schizophrenics and multiple personalities and bipolar people.  So I suggested a psychologist.”

Playing a psychologist also appealed to Newhart because “when dealing with patients, no matter how ridiculous they are, you can’t let on that they are ridiculous.”

As I recall, the series did humanize persons who sought help from psychologists, but I’m wondering just how much the weekly “parade of crazies” really improved public understanding of mental illness.  Thoughts anyone?