In today’s post, I’d like to raise my concerns about the use of “drinking the Kool-aid” as a metaphor for mass conformity — the latest example is a post on outcomes assessment by Clio Bluestocking .  Since Clio is too young to remember the photos of bloated corpses rotting in the Guyana sunshine, I just want to remind her that the members of the People’s Temple who drank the Kool-aid (some say it was Flavor-Aid) died.

Perhaps this metaphor is meant to convey the idea that assessment wonks are spiritually dead, souless beings sent here to mess up our idyllic academic lives.  In that case, why not just call them zombies?  They eat our brains, right? (metaphorically anyway)  Or, for fellow Star Trek geeks out there, how about this? 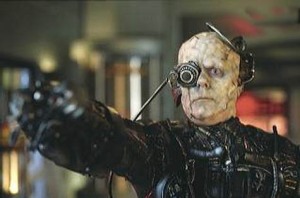 I’ve also seen the metaphor used  to describe blind political allegiance (e.g. on Bill O’Reilly’s show, reports of Obama’s young followers, etc.)  Rad Geek has criticized  this tactic as callous as it trivializes the mass deaths of the Jonestown cult members — I agree, but also just think it’s a bad metaphor — unless the Kool Aid is laced with LSD (a la the Merry Pranksters) instead of poison.

So, let’s come up with a more suitable metaphor, shall we?  Might a suggest a highly sweetened, artificially flavored alternative — Jello shots.  Mind-numbing, but not deadly if one consumes responsibly.

5 thoughts on “Why Kool-aid is not a good metaphor”