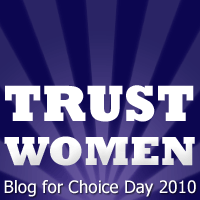 via NARAL Blog for Choice

This is NARAL’s 5th annual Blog for Choice Day, which falls on the 37th anniversary of the landmark U.S. Supreme Court decision Roe v. Wade.  In honor of the late Dr. George Tiller, who often wore a button that simply read, “Trust Women,” this year’s Blog for Choice Day question is: What does Trust Women mean to you?

Followers of this blog know that I’m currently working on a book on the history of the emergency contraceptive pill (ECP), aka the “morning-after pill” for the series Critical Issues in Health and Medicine for Rutgers University Press.   [please take the survey by clicking at the link at the bottom of this blog]

Right now, I’m working on Chapter 5, which looks at feminist activism to raise awareness about and convince the FDA to approve a dedicated ECP product.  Some of the leaders of this endeavor were also prominent in NARAL, so covering the history of this organization is important to my work. In her essay, “Toward Coalition: The Reproductive Health Technologies Project,” from Abortion Wars, edited by Rickie Solinger, Marie Bass describes how RHTP arose out of her work as political action director for NARAL.  Bass found her experience unsatisfying because of the way in which the abortion issue “had been appropriated by shallow, insensitive, and opportunistic politicians.” She found that congressional candidates — “usually male, but not always” — formed their position on abortion according to “how the political winds in their state or district were blowing.”  She found the politicians who claimed to be pro-choice to be the most frustrating. Even though public opinion polls indicated that the majority of Americans were pro-choice, these politicians would give torturous “non-answers” to the question “are you pro-choice”.  Even more disturbing for Bass was the fate of former congresswoman Geraldine Ferraro during her historic run for vice-president in 1984, who was “brutally assaulted for her audacity, as a Catholic woman, to espouse a position on abortion that contradicted the Church.”  Meanwhile, pro-choice Catholic men (e.g. Mario Cuomo and Ted Kennedy) were given a pass.  “Evidently, men could be indulged in a little waywardness, but a Catholic woman — never!”

Around the same time, Bass heard about a new drug called RU-486, which would terminate an early pregnancy.  Bass’ first thought was maybe “this was a way out of the quagmire of the abortion issue” since it would take abortion “out of the political arena and put the decision back in the hands of women and medical practitioners, where it belonged.”  She joined with other activists from NARAL, Planned Parenthood, and other organizations — including Joanne Howes, Nanette Falkenberg, and Sharon Camp — to work on bringing RU-486 to market in the United States.   When they called the first meeting of what would become RHTP in 1988, Bass and her “small cabal of collaborators” assumed that opposition would come solely from anti-choice individuals and organizations.   They were quite surprised to find that while everyone at the table was pro-choice, they had widely divergent opinions about RU-486 and reproductive technologies in general.  Consumer advocates, such as Judy Norsigian from the Boston Women’s Health Book Collective, “introduced concerns about whether the drug affected white women and women of color differently and about access to hospital care in the event of emergencies such as prolonged bleeding.” Others called attention to the ways in which technologies had been used coercively to control reproduction among poor women of color “at the expense of women’s autonomy and health.”  Some recalled how drugs or devices such as DES and the Dalkon Shield, once touted as wonders, “had turned into disasters for women.”

Therefore, before RHTP could get anywhere with RU-486 or anything else, they had to build trust among various activists, especially women of color: “No matter how well-meaning we may have been, as white middle-class women, we simply could not represent the interests of women from other groups.”

So, this is what “trust women” means to me — building coalitions around the common issue of abortion and reproductive rights more generally, while respecting diversity — whether this be race, class, age, sexuality, disability status, or political affiliation [on this last note, this would mean supporting pro-choice Republican women over anti-choice Democratic men or women].

Finally, on the issue of blogging more generally, I’d like to address an article from Newsweek, entitled “Who’s Missing at the ‘Roe v. Wade’ Anniversary Demonstrations: Young Women.”  According to Kristy Maddux, assistant professor of Communication at the University of Maryland, who specializes in historical feminism, young women are still concerned about reproductive rights, “but they’re not trained to go out and protest.” Instead of marching in the streets, young women are writing on their blogs or social network sites.  “I don’t want to frame young women as lazy, ” says Maddux, “but they don’t have any reason to believe that it matters if they go out and protest. Instead, they talk about their positions to friends and neighbors.”

Excuse me, but what the heck is wrong with blogging?!  [and why isn’t a scholar in the field of Communication paying attention to the impact of social media on feminist activism]?  Get with the program, sister, and  blog for choice [or tweet or whatever] yourself!