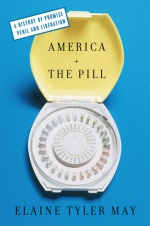 via – NYTimes.com.  This is an editorial by University of Minnesota Professor Elaine Tyler May, whose new book America and the Pill: A History of Promise, Peril, and Liberation (pictured at left) was just released.   I’m glad to see that May deflates the truism that the Pill caused the sexual revolution — as Kinsey observed, the sexual revolution was well underway before 1960.  Furthermore, as said in my previous post, the Pill wasn’t available to many women when first released.  Even married women in the state of Connecticut could not legally obtain the Pill until 1965 and it took another seven years for the “right to privacy” to be extended to unmarried women as well.

Since Knitting Clio never misses an opportunity to plug her own work, I’ll mention that the Pill is the subject of my paper at the upcoming annual meeting of the American Association for the History of Medicine .   The title is “Safer Than Aspirin: The Campaign for Over-the-Counter Oral Contraceptives.” A longer version of the paper will appear in The Prescription in Perspective: Therapeutic Authority in Late 20th Century America. Edited by Jeremy A. Greene and Elizabeth Siegel Watkins, under contract with Johns Hopkins University Press.

On January 21, 1993 the U.S. Food and Drug Administration (FDA) announced in the Federal Register that the agency’s Fertility and Maternal Health Drugs Advisory Committee would hold an open public hearing to discuss issues related to providing oral contraceptives without prescription. Philip A. Corfman, director of the Center for Drug Evaluation and Research, stated the agency’s reasoning for this hearing:”I think the pill is safer than aspirin and aspirin is available over the counter.”

One week after the posted Federal Register notice of the open hearing, FDA officials canceled the session. The reasons for this abrupt move, and subsequent failures to make oral contraceptives available over-the-counter, are the subject of this paper. I will use the discussion about nonprescription status for oral contraceptives as a case study in the history of the switch from prescription to over-the-counter drugs. This paper will highlight the conflicting positions of the various stakeholders invested in restricting or promoting consumers’ direct access to their medications.

2 thoughts on “More on the History of the Pill”