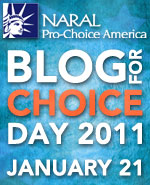 As you can see from the graphic at left, the annual Blog for Choice Day was yesterday.   Since today is the actual 38th anniversary of Roe v. Wade, I figured, better late than not at all!  This year’s question, Given the anti-choice gains in the states and Congress, are you concerned about choice in 2011?

I don’t have much to add to other bloggers’ answer other than echo the overall consensus, Yes, I’m very concerned!

My worries extend beyond the choice of abortion — access to birth control also appears threatened, not so much by new laws, but more so because of economics.   The Republican majority in the House will not be able to revoke the health care law, at least not while President Obama is in the White House and the Democratic party still controls the Senate.  Yet, the existing health care law isn’t really adequate when it comes to contraceptive coverage.  Also, while many reproductive rights activists rightly celebrated making emergency contraception available over-the-counter (OTC), this might actually make things worse for some women because OTC products are not covered by private insurance plans or Medicaid.  Thus, while the rise of what pharmacy historicans call “OTCness” over the past two decades has weakened the boundary between patients and the health care professionals, it has done nothing to address the economic inequalities in the United States that continue to pose an insurmountable barrier to those without the means to pay for the products of this self-care revolution.