via  Society for Menstrual Cycle Research.

Just returned from an awesome bike trip from Prague to Budapest with Czech Active tours — this was one of the best organized trips I’ve done. The tour leaders are very friendly and laid back.  I’d recommend this to anyone who likes to ride and enjoy nice scenery and good food.

Before the trip, we spent a few extra days in Prague.  One of my favorite sites was the Toy and Barbie Museum.  I hope my buddy Historiann will enjoy looking at the website on the Barbie exhibition, in honor of the doll’s 50th anniversary.  Highly recommended for toy enthusiasts and/or fans of Barbie.

Here I am with the rest of Team Bauer at yesterday’s BKM/Steelcase Ride for MS Society of CT.  We finished the 50 mile ride in good time — about 3 1/2 hours.  The weather was perfect: sunny, warm but not too hot.

I’ve been told that it’s not too late to donate.  So, if you’re so inclined, please go to my participant page.

This past Saturday, I made my annual attempt at the Tri-state Seacoast Century sponsored by the Granite State Wheelmen.  The ride starts in Hampton Beach, but because my parents’ summer house is right on the course as it goes through York, ME, I start there and do the course in reverse.  This meant riding by myself for 6+ hours, into a head or cross-wind the whole time.  So, alas, I only managed to finish 85 miles before my back crapped out on me, not too shabby since the longest ride I did this season was 65 miles, back in May.  Let’s hope my usual bike ride buddies will be able to join me next year.

It’s not often I write about cycling and politics in the same post, but I just had to report on the exchange about Barack Obama over at the Eastern Bloc Cycling Club forum. It all started with a link to an AP story and photo of the senator riding his bike along Lake Michigan. One guy who works at Benidorm Bikes and Boards, who is also an adjunct professor of Geography at my university, said he looked like a dork, and that at least we now have a mountain biker in the White House. This “dork” statement arose from what he thought was a very large fender on the back of the senator’s bike. Since this guy works in a bike shop, one would think that he would recognize a tag-along bike trailer when he saw one!

Another guy retorted, “ right now we have a criminal in the WH, passing off as a president. Dork or world-class leader, Obama will be a major improvement.”

This led to a full out political battle, including allegations that Obama would impose a luxury tax on bicycles (dude, that would only be on ones that cost more than $40,000 — please tell me why you need a solid gold bicycle?) as well as a link to Barack Obama is Your New Bicycle.

What bugs me most about the posts by my so-called colleague in Geography is his cracks about other academics – e.g. “When it comes to my President I want someone with “bottom”, not a light weight intellectual. I work with them at CCSU every semester.”

At least he didn’t call us intellectual light-weights — still, I’m wondering if his chair and department mates would like to hear that? Also, not sure what he means by bottom. Is he comparing the sizes of the two senators’ read-ends? !

You can read the entire exchange here. I’m about to go on vacation in Turkey for two weeks, starting Wednesday, so won’t be replying to this anymore, and won’t be moderating this blog until I get back.

Friday mornings, I usually go for a long bike ride with friends from Eastern Bloc Cycling Club.  Yesterday was a gorgeous day, and two-thirds of the way through our 40 mile ride, we stopped at the Planted Feather Farm and Bakery for some fresh-baked goodies.  Here, we got to meet Ruby the Sow, whom we think would make an excellent club Mascot:  Just don’t “hog” all the energy bars!

It’s been a busy week here at the University, so I haven’t had much time to do more than note the following articles related to disability history, loosely defined in one case.

First up is the New York Times review of The Lives They Left Behind, a book version of an exhibit on the Willard State Hospital at the New York State Museum. I really love the exhibit and am looking forward to reading the book. The book reviewer, being an M.D., seems to be missing the point of historical scholarship. She writes, “basing a complex argument on fragmented and archaic case histories is problematic both for science and for style. A coherent scientific argument demands complete, current data, not reinterpreted glimpses of the past.” This may be fine for “evidence-based medicine,” but really unfair to apply to historical scholarship, which by its very nature is based on the shards and pieces that manage to survive. Also, sometimes you just have to get angry about social injustice, even bitchy, like this righteous woman. [as Tina Fey said when Senatorella was on SNL, “bitches get things done.”]

Another story on exhibiting disability history to the public comes from this CBS news story on the Trans-Allegheny Lunatic Asylum, which has been turned into a tourist attraction and historic site. Some mental health advocates have objected to the use of the word “lunatic” in the museum’s promotional materials. Others have suggested that this term, while politically incorrect today, is an important part of the history that should not be covered up to suit modern day sensibilities. I’m inclined to lean toward the latter position, just as long as it doesn’t lead to a revival of the term in the popular lexicon (only we loonies can use the word!)

The final story comes from my interest in bicycling, and is not really about history except that it regards a well known cyclist from the 1980s and early 1990s, Davis Phinney. I had no idea he had Parkinson’s disease. His son is now an elite cyclists aiming for the Olympics. Maybe they’ll let Davis carry the torch, like they did with Muhammed Ali? Probably not, Davis was great in his day, but he’s not Lance.

Just received this from one of my “biker chix” friends.  Ride on!

‘Getting girled’ is the latest in bike racing jargon from the man-pack. Admittedly, I know little of the history of strong women in cycling. My basis for discussion is simply emperical. Many years ago, only a few elite females could hand it to the guys. The lead pack of a road race was seldom anything but a sausage fest. In the dirt, even the Pro women were seldom pulling faster times in than the men’s Expert field. But women’s competition was marginal at the local and regional level in the midwest and SE US. Still, many men have blown themselves up to avoid being ‘girled’.

Before anybody finds any reason to be offended by the phrase ‘getting girled’, let me explain that it is a great thing. Moreover, ‘Getting womanned’ is just too hard to say.

In the mid-90’s thousands of women like Amanda McKay, Trish Stevenson & Karen Masson (now a mom!) got into the packs with the men, put up with our attitudes and egos, and perservered. In the new millenium, these grassroots heroines are huge players in the bike racing scene. They are inspiring all riders, shattering the glass ceiling of the male-dominated sport.

In 2003, I had the opportunity to ride the Shenandoah Mtn 100 with Trish S. I was in pretty good shape at the time and expected to finish in the top 10%. About 30 miles in, Trish grabbed my wheel, and we worked together for the next 30 miles or so. She probably did most of the work. Eventually, she pulled away on a long singletrack climb. I never saw her again. Damn, it made me smile. She won the women’s category with a big margin, and I made it into the top 10% of the robust field about 20 minutes back. (This was my first time at being ‘girled’. Frankly, it was a turn-on.)

Show the world what you’ve got, ladies! 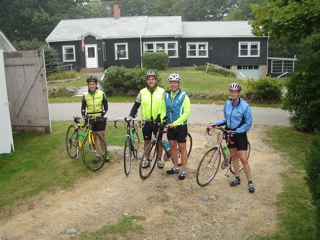 Here are Bridget, Tom, Nancy, and I are the start (sort of) of the Tri-State Seacoast Century last weekend. Since my parents’ house is right on the Maine end of the course, we decided to start there and then work our way south. It was a great day — a bit chilly and foggy to start, but the sun came out mid-morning and we had a great tailwind to send us back to York, ME. Will definitely do this next year, although next time I’ll use the chamois butt’r sooner!

Here’s a picture of Bridget and Tom enjoying the sunset on the boathouse: 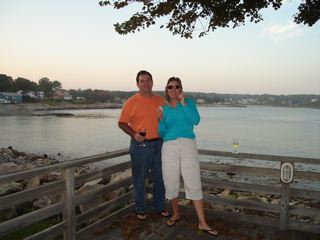 And here’s another photo of us enjoying a post-ride dinner with my parents:

Reservations are currently being accepted for next year.  Please book early and often!

The local radio station, WRCH, posted some pictures of the ride including Team Bauer (see below).  We rode for Sheila and Dave (center) who have MS.  The station was also supposed to have a podcast of interviews they did before the race, but I can’t seem to find it on the website. 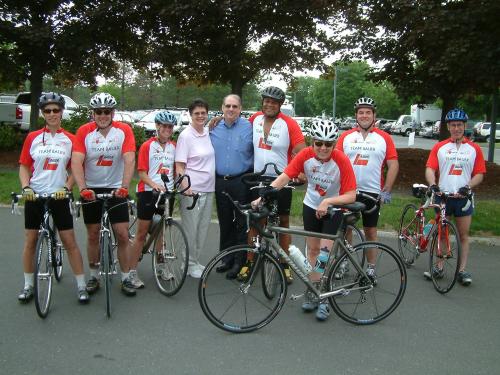 This work is licensed under a Creative Commons Attribution 3.0 Unported License.

This work is licensed under a Creative Commons Attribution 3.0 Unported License.
Drunk Austen

Orientalism and Yoga in the 21st Century

is a Vice Provost, Dean, and Professor at Northeastern University

History for the Future

How did Vikings communicate at sea?

Danczuk Digital History
History Has Its Eyes On Me

Why Do You Write Like You're Running Out Of Time?

A site to think about my academic work the same way I do everything: by overthinking it.

History in the Digital Age

I WILL NOT SOON FORGET YOUR KINDNESS OR YOUR DECENCY
recklessknitting.wordpress.com/
The Junto

The latest news on WordPress.com and the WordPress community.