Once again, Historiann has beat me in posting on a hot political topic — the Amethyst Initiative, initiated last month by a group of college presidents who argue that the National Minimum Drinking Act (1984), which imposed a penalty of 10% of a state’s federal highway appropriation on any state setting its drinking age lower than 21, has been a disaster.  Not only has it not solved the problem of alcohol abuse among college students, it has actually exacerbated it by creating a “clandestine culture of binge drinking.”

I commented briefly on Historiann’s blog, but since this falls squarely in my area of expertise, I think a blog post of my own is in order.

As I argue in my recently published book, Student Bodies, concerns about undergraduate alcohol use and abuse date back to at least the early twentieth century. Many college presidents supported prohibition as a great solution to the problem of drinking on campus.  Even after prohibition ended in 1933, college administrators supported total abstinence even as alcohol became a normative part of adult sociability. Most states at this time established a minimum drinking age of 21.

At the same time, mental health experts classified excessive drinking as a disease.  Researchers at the Yale University Center for Alcohol Studies (later relocated to Rutgers), working closely with the Yale Mental Hygiene department in the health services, in 1949 conducted a survey of twenty-seven colleges around the country, encompassing both public and private, coeducational and single-sex, white and black, non-sectarian and religious (including Catholic, Jewish, and one Mormon college), and different regions of the country. Reports in the popular press made fun of the study, joking “Yale will get its facts about student drinking ‘At a table down at Mory’s,’” a New Haven bar popular among undergraduates.  The results of the study were that drinking was not a major problem at colleges and universities, and that patterns of drinking were no different in colleges and universities than in other parts of society.  They concluded that the key to prevention was not “scare tactics” that emphasized the pathological consequences of excessive drinking, but education that helped students make responsible choices about whether or not to consume alcohol.

During the early 1970s, partly in response to student movements of the period — many states lowered the drinking age to 18 — the thought being that if a young man could be sent to war, he should be able to legally purchase and consume alcohol. It was also at this time that the voting age was lowered to 18. In short, what happened at this time is that college students demanded, and received, the same constitutional rights as adults — e.g. to vote, freedom of speech, freedom of assembly, rights to privacy (including access to contraception, and abortion), etc.

This consensus was challenged by the College Alcohol Study started by a group of researchers at the Harvard School of Public Health, led by social psychologist Henry Wechsler, who began exploring the problem of college drinking in the late 1970s and early 1980s.  Their work in part led to the passage of the National Minimum Drinking Age act of 1984. It also led to the construction of “binge drinking” as a disease and social problem particular to young adults in higher education settings.  I was an undergraduate at the University of Vermont while all this was going on — the state was a holdout on keeping the drinking age at 18 but was eventually forced to raise the drinking age to get those federal highway funds.

More recently still, the abstinence approach bolstered by the College Alcohol Study has been challenged by research conducted by the Social Norms Institute, who argue that the “health terrorism” perpetuated by the “binge drinking” model has not solved the problem of campus drinking, it simply has created an underground culture of drinking. They argue that by focusing on the most egregious cases, prevention efforts have exaggerated the extent to which most college students drink.  Their approach is remarkably similar to that proposed by the Yale Center in the 1940s — i.e. emphasize wellness, resilience, and informed decision making.  To illustrate how their approach differs: 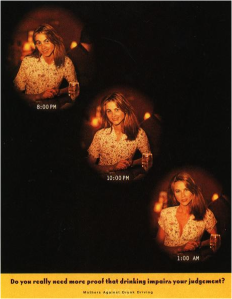 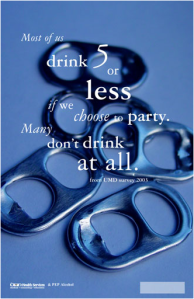 So, to summarize — it seems to me that Historiann is asking the wrong questions, and perpetuating notions of 18-21 as “others” who need to be controlled by older adults, especially if they enroll in colleges and universities.  Earlier this week, I sent a colleague in Scotland an article by local columnist and radio host Colin McEnroe regarding a recently imposed curfew in the city of Hartford.  He replied:

“I find our politicians approaches to ‘young people’, as they are called, as
if they are a   separate breed from humanity, rather contradictory.  Young
people like to congregate on street corners.  It doesn’t mean they are doing
any harm.  Some get up to mischief, but most of the more serious crimes are
perpetuated by not-so-young people.  The curfew experiment was carried out
in Hamilton, a town in the county of Lanarkshire.  The latest plan to
control ‘young people’ is to prevent them from buying alcohol if they are
under 21.  The problem that I have with this is that people under 21, carte
blanche, are being considered irresponsible in their consumption of alcohol,
while those over 21, carte blanche, are considered responsible.  This idea
is occurring at the same time as it is considered OK to send teenagers in
the military to Iraq or Afghanistan (they are responsible enough to be
entrusted with that!), while there is also a wish by the present governing
party in Scotland to reduce the voting age from 18 to 16 so as to include
and engage young adults in the political process.  ‘Young people’ are our
nation’s future, the responsible citizens and decision-makers for tomorrow,
but I think that today you would be hard pushed to convince them of that.”

I couldn’t have said it better.  Thanks Iain!

P.S.  After I wrote this, I saw an excellent post by Kittywampus — amen, sister!

5 thoughts on “Rethinking the Drinking Age: a historical perspective”